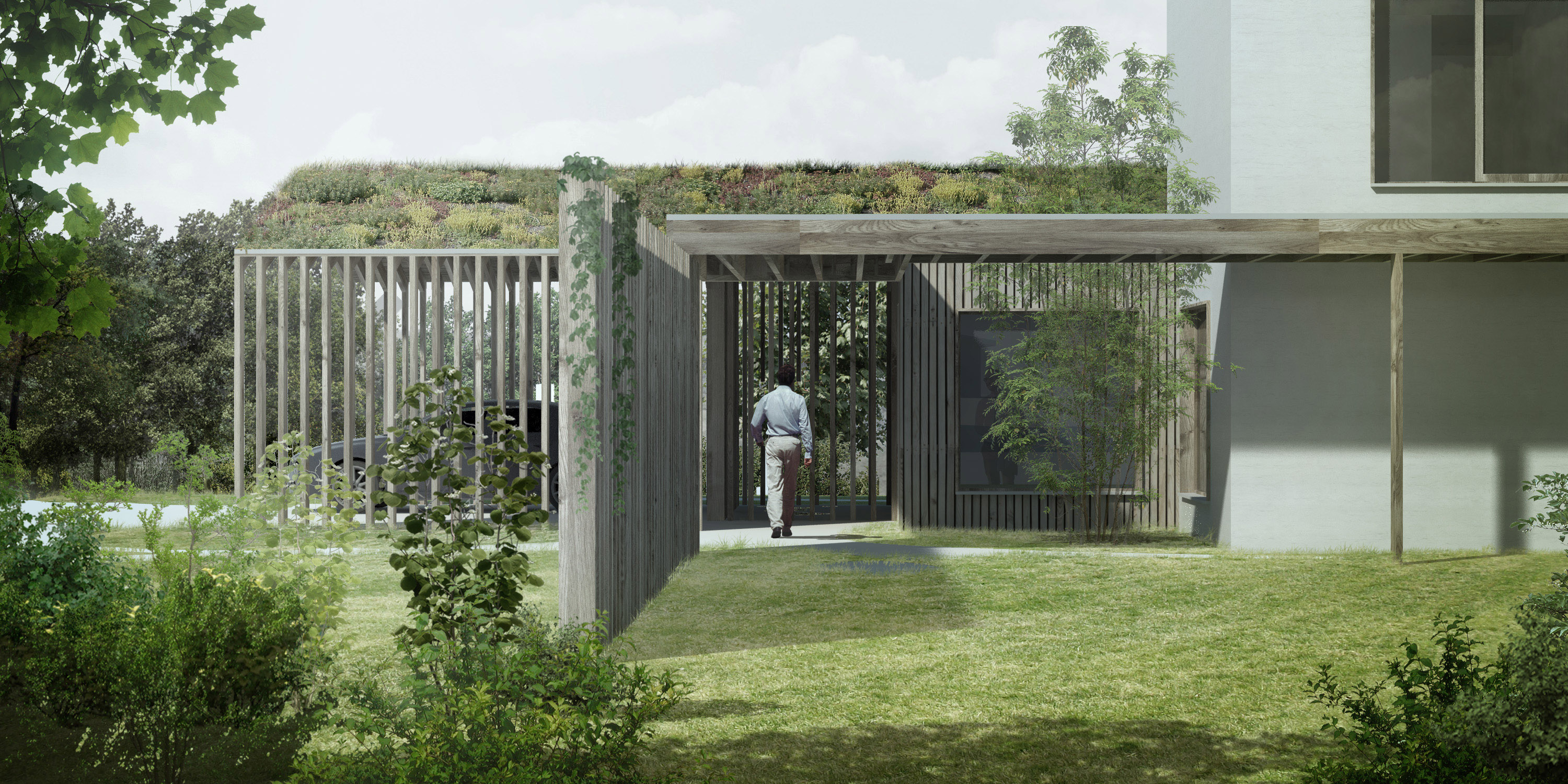 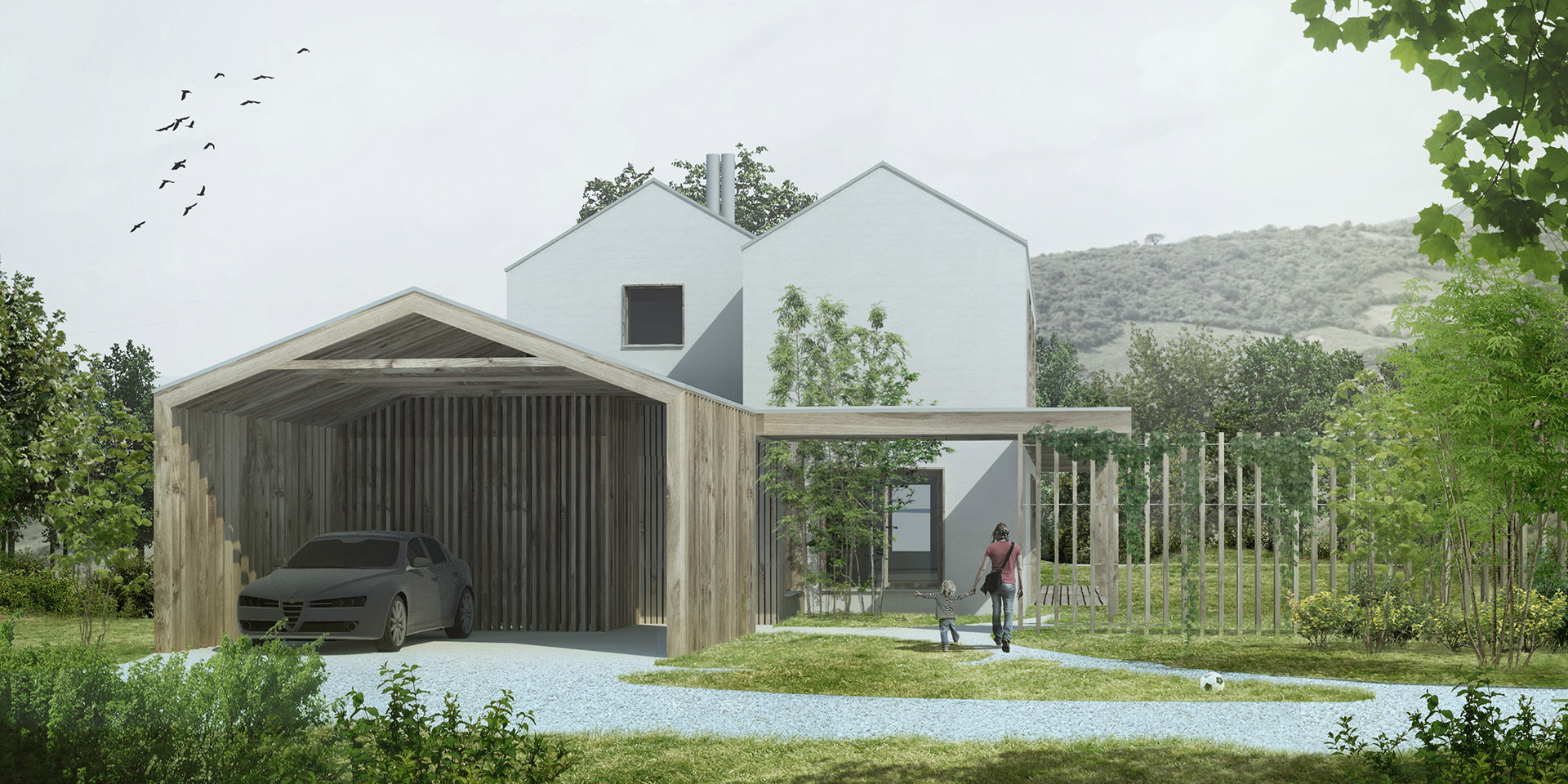 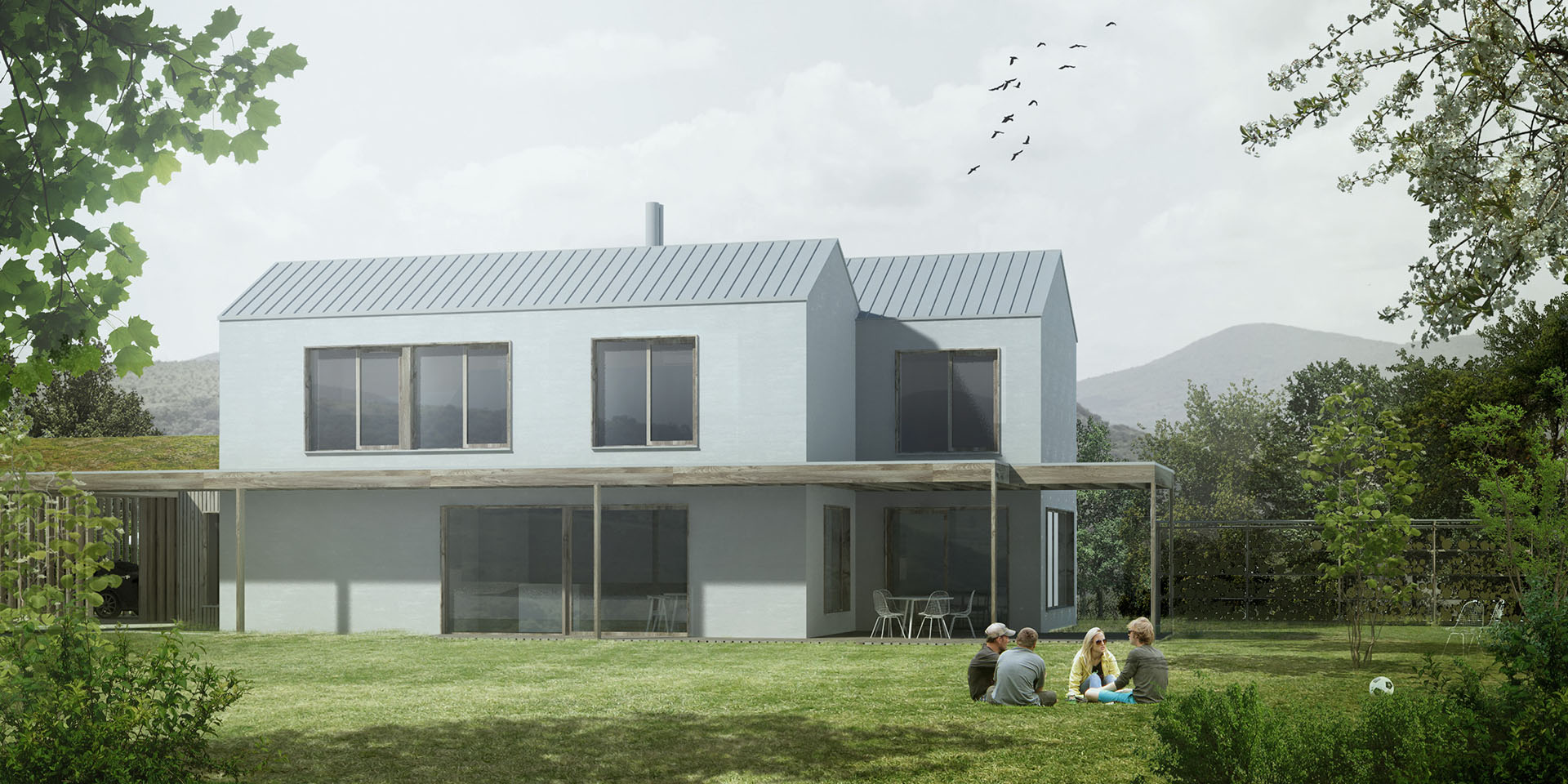 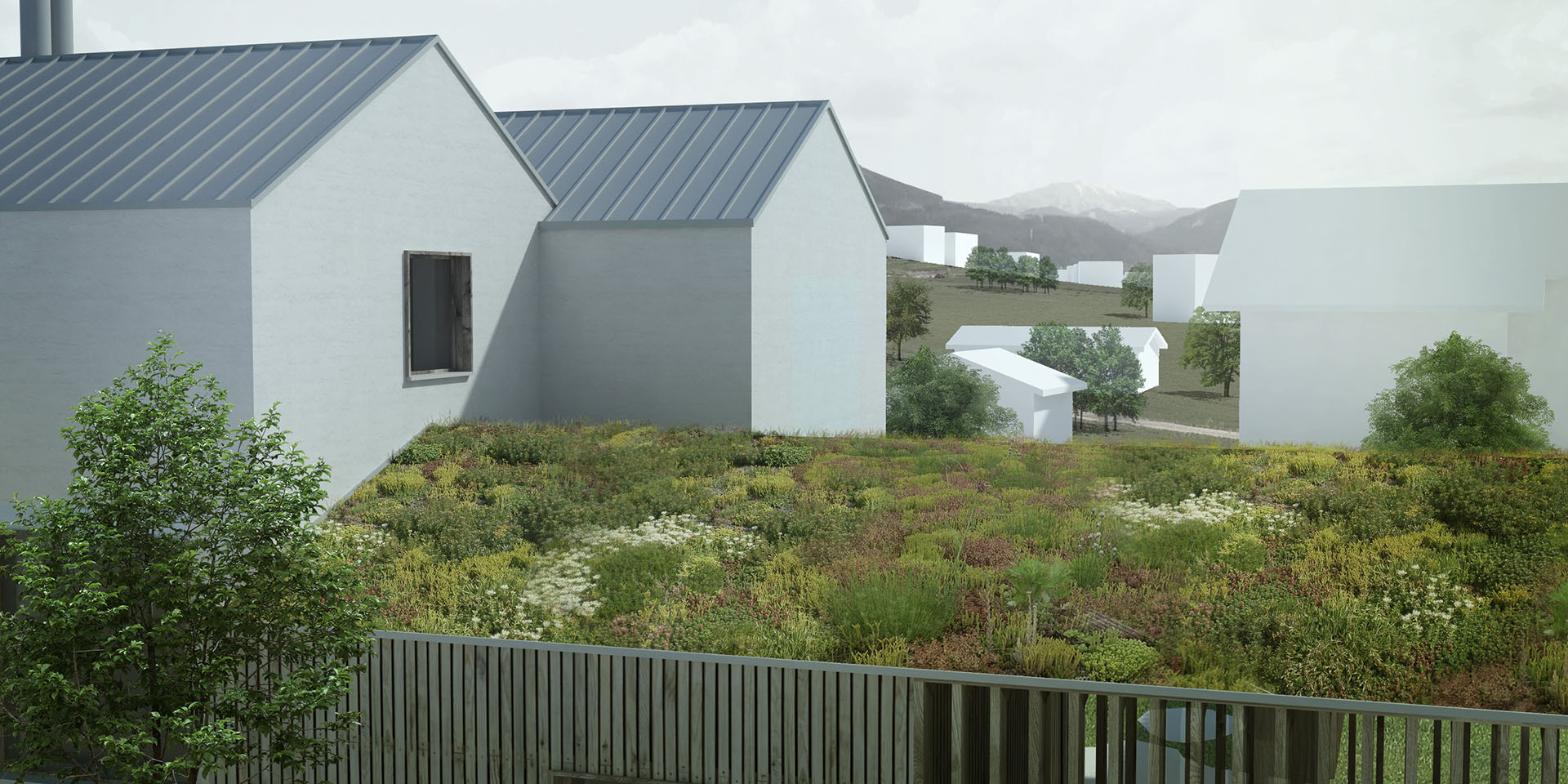 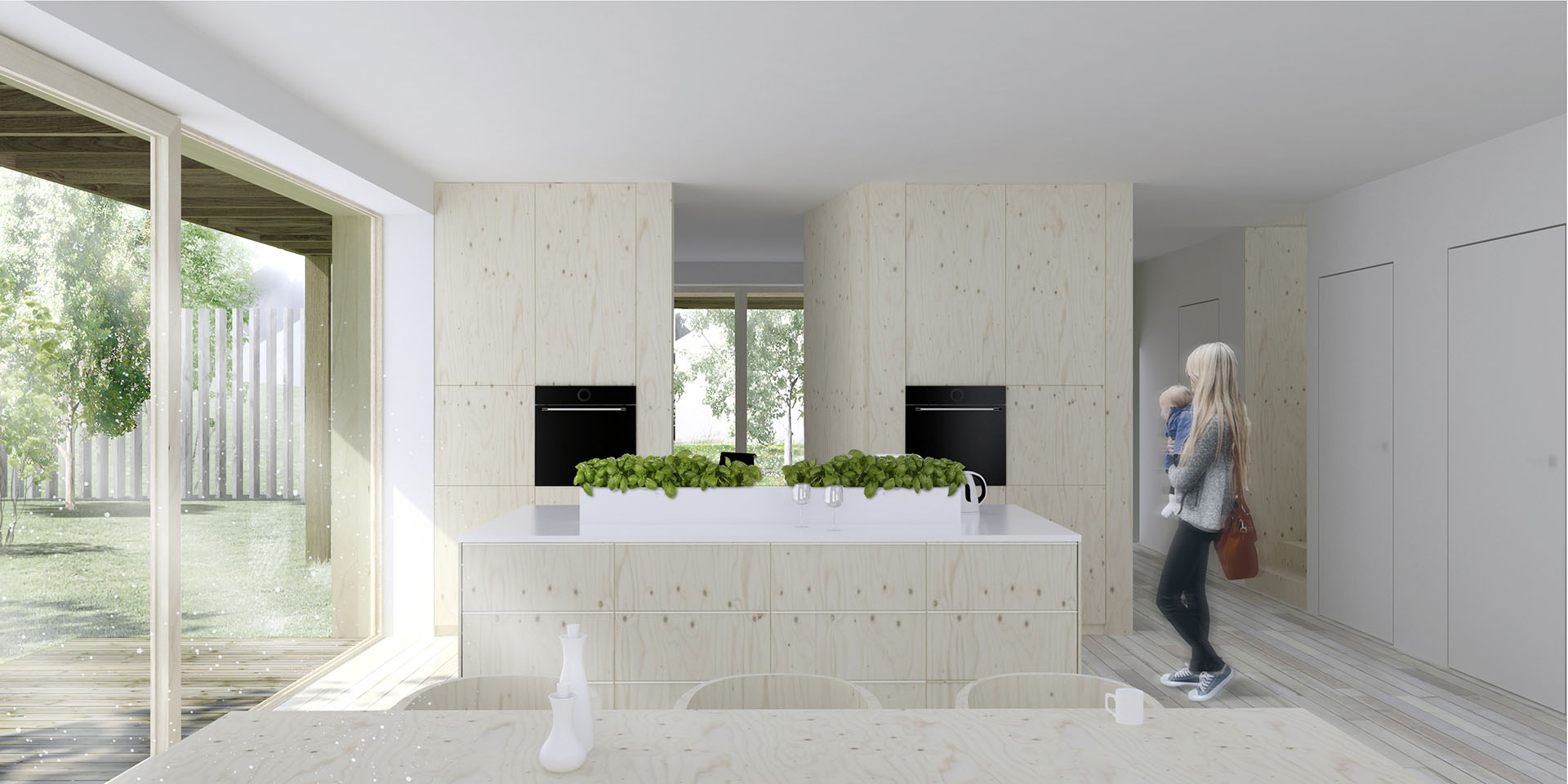 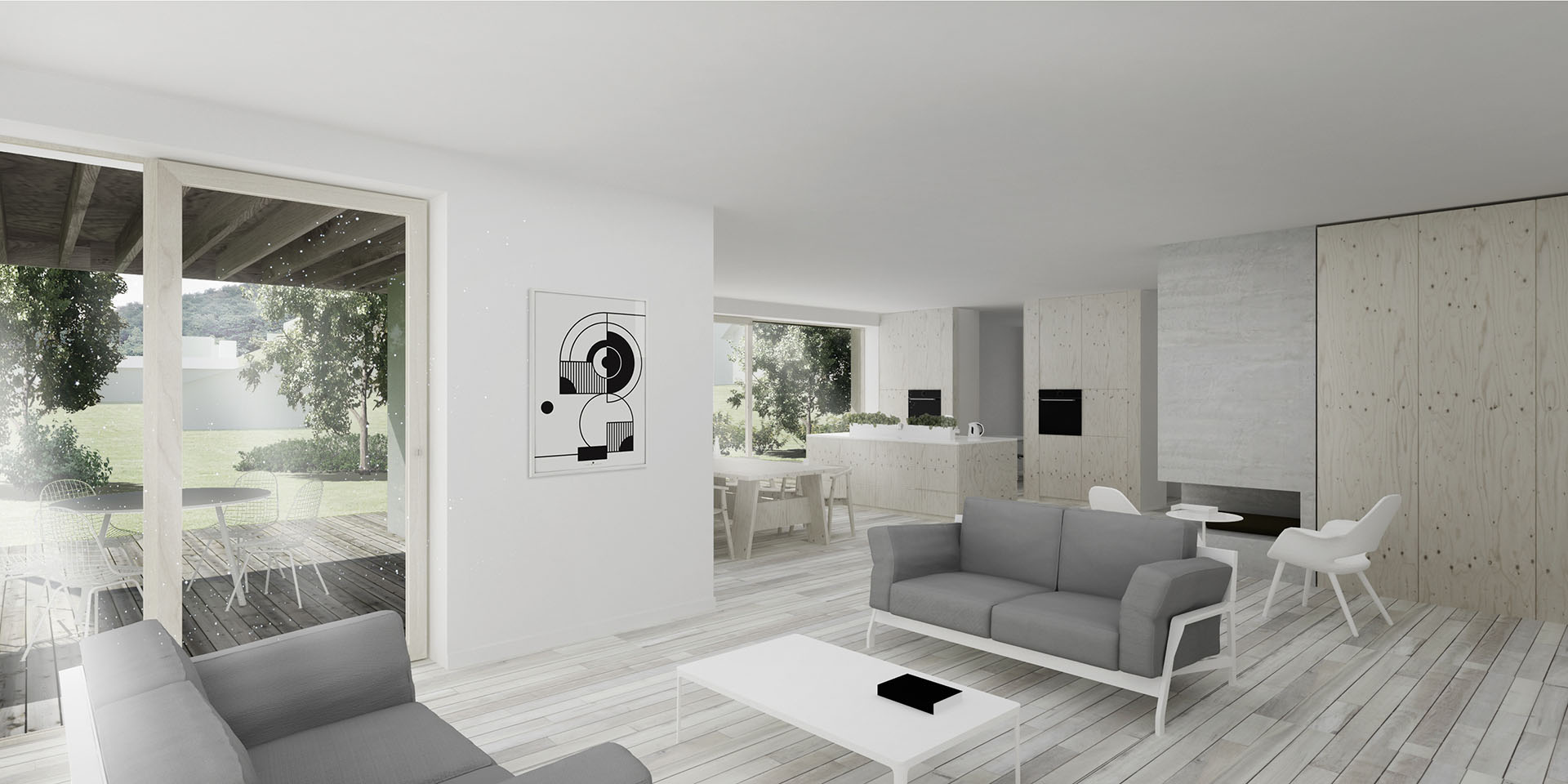 The house is situated in a small residential neighbourhood Saffen in the north part of Scheibbs town. The rectangular plot is stretched along the east-west axis and opens with a beautifull view towards the Erlauf river valley and Ötscher mountaintop – which adds-up to characteristic for the place scenery. 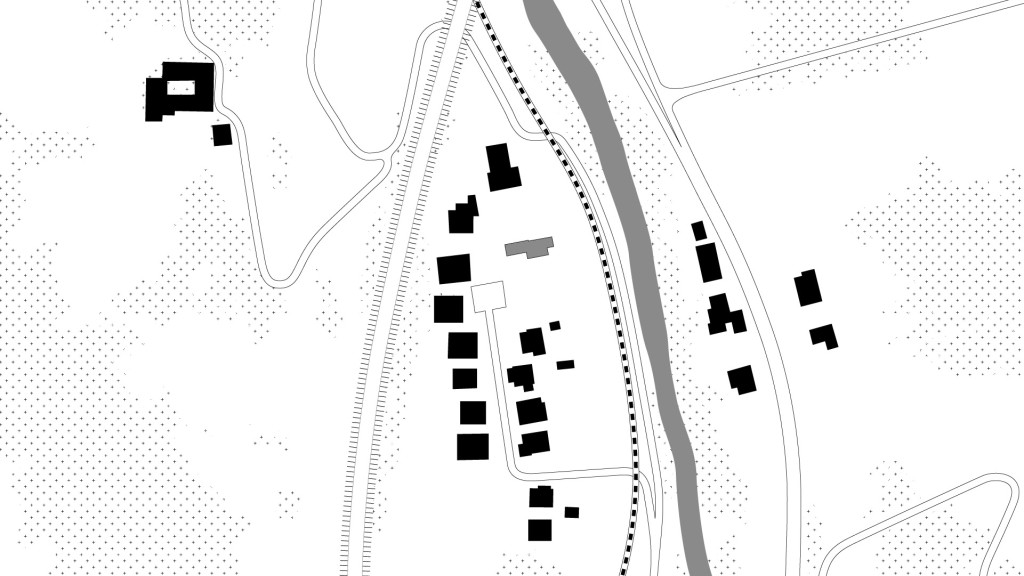 However beautiful the surroundings the plot lies in a demanding location as it is flanked with a rail road from the east and a raised main road from the west and north. Protection from the traffic and rail noise are the biggest design challanges for the project. 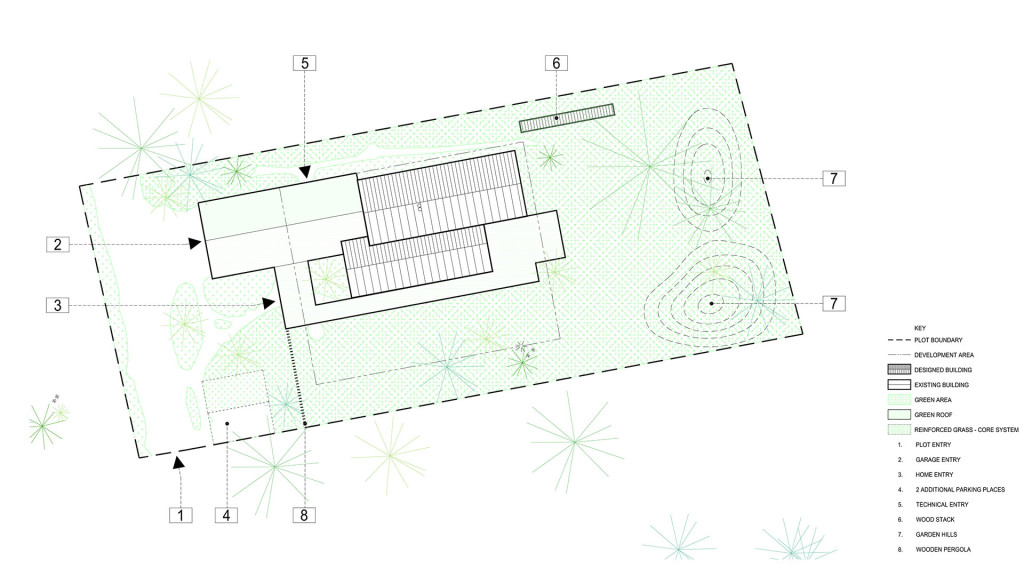 To make the best use of the plot area as well as to protect living areas from the traffic noise, the building is maximally pushed towards the north border of the plot. Entrance zone situated on the west side is used to create additional sound barrier for the garden. Service route retained to alow access to the adjacent plot in the north is used for a vehicuar access to the garage canopy. Private garden takes the southern and eastern part of the plot. It is arranged so that it creates an impression of naturally formed landscape. Small hiils created along the eastern border of the plot help to separate the house from the railroad noise. Small wood stack for the fireplace helps to limit the noise from the northen estacade.
To articulate the natural character of the garden all the foot and vehicular paths are designed as graveled without visible sharp borders. All the wooden protective fences and facades are prepared for beeing covered witch ivy and other climbing plants. 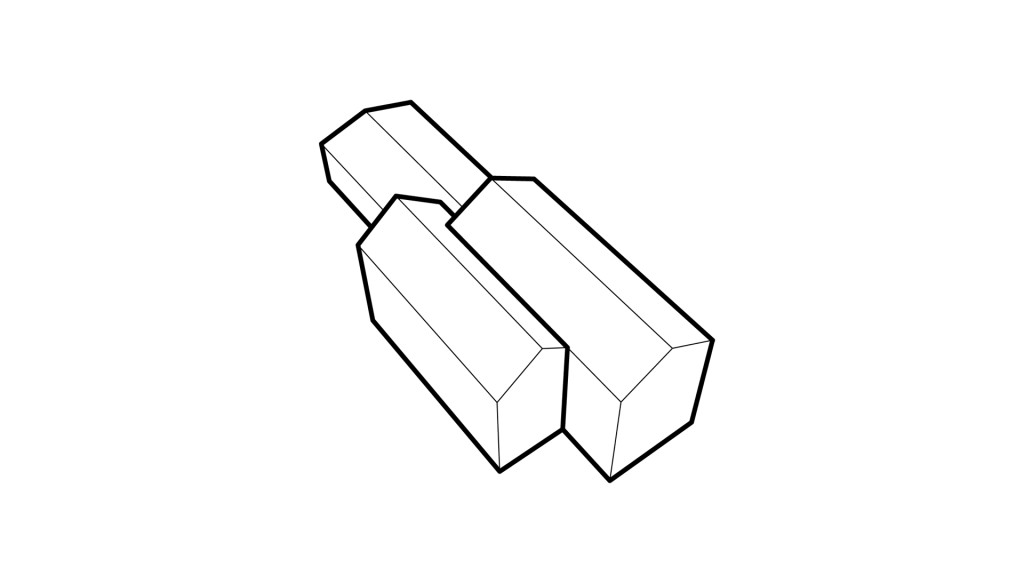 Building consissts of three parallel to eachother rectangular volumes stretched along the longer axis of the plot with the main exposure towards south. The volumes are covered with gable roofs with gables parallel to the street similarly to neighbouring houses. The roofs of higher volumes are pitched 30 degrees reminding of traditional austrian mountain challets whereas the lower volume is pitched 20 degrees to hold a green roof and to comply with local code for auxilary buildings. 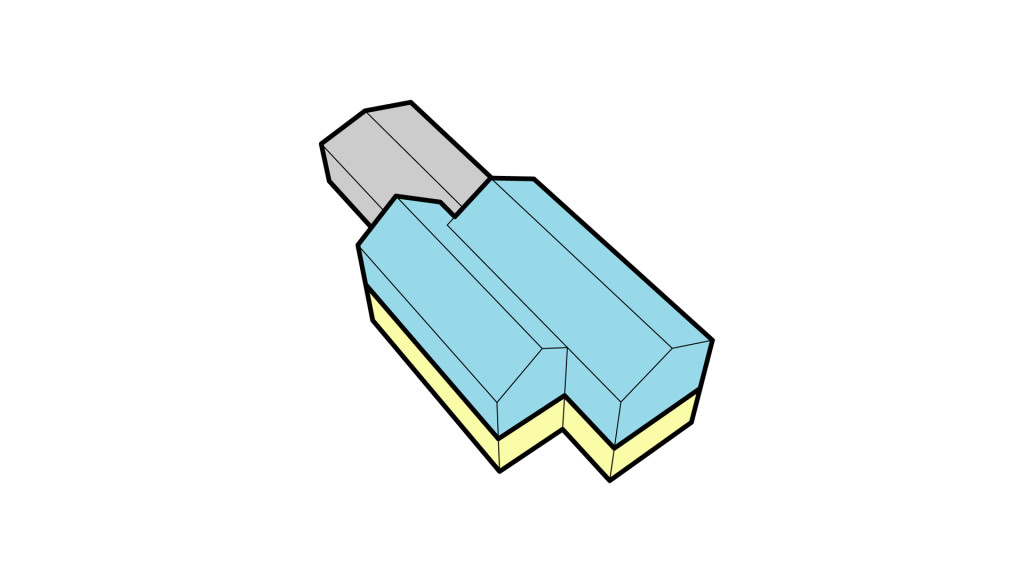 The two storey building is devided into two functional zones. 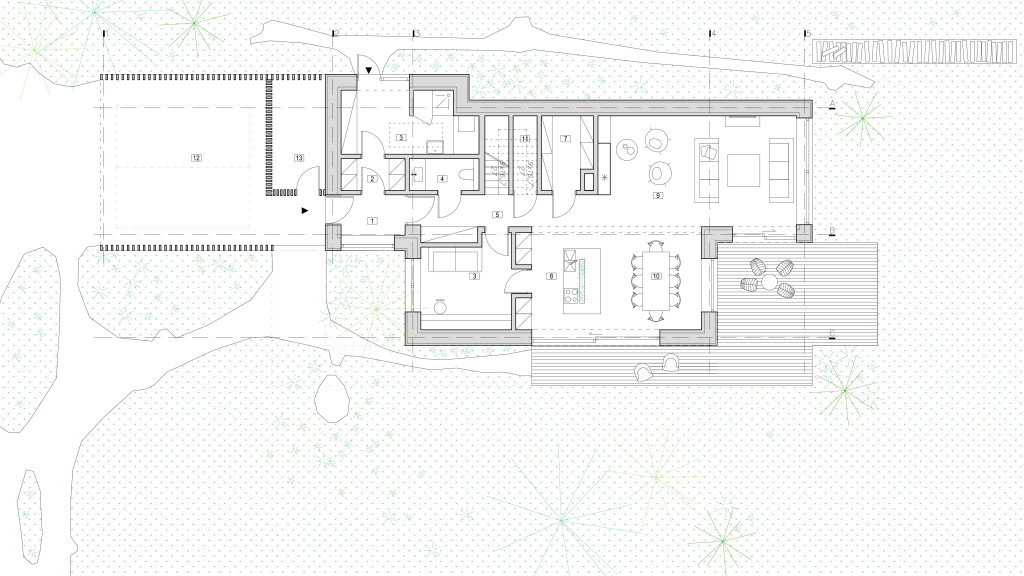 Day zone on the ground floor consists of the livingroom, kitchen, diningroom and office. 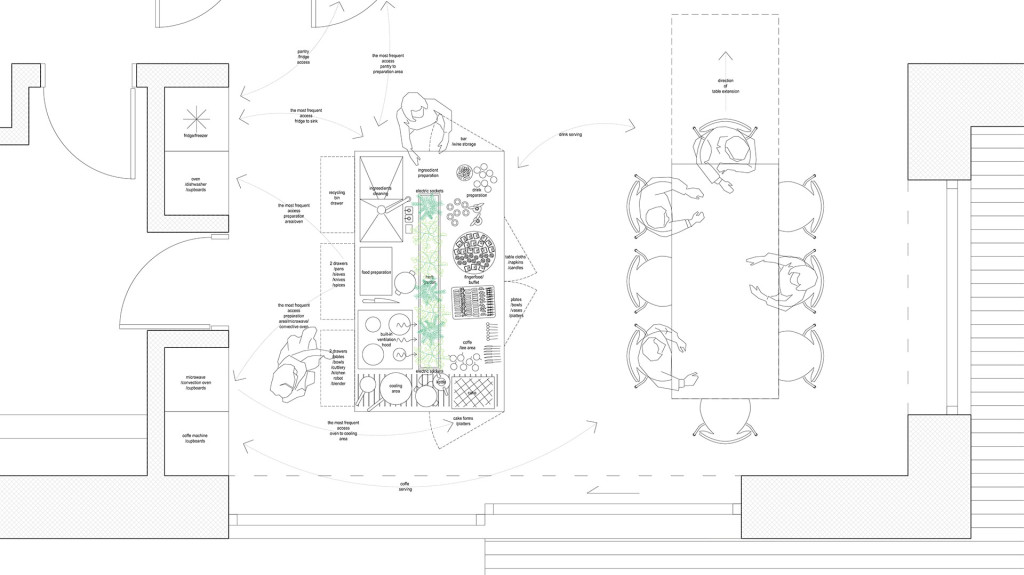 Ground floor layout assumes enfilade connection between diningroom, kitchen and office into one spacial flow adjacent to the parallel livingroom with a fireplace area. 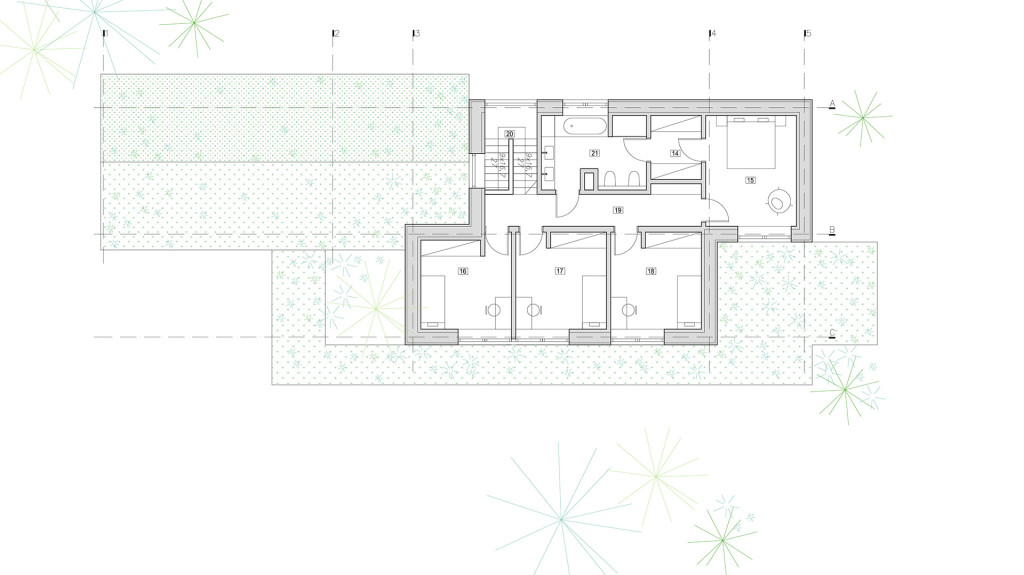 Night zone on the first floor houses 4 bedrooms, wardrobe and a large bathroom. 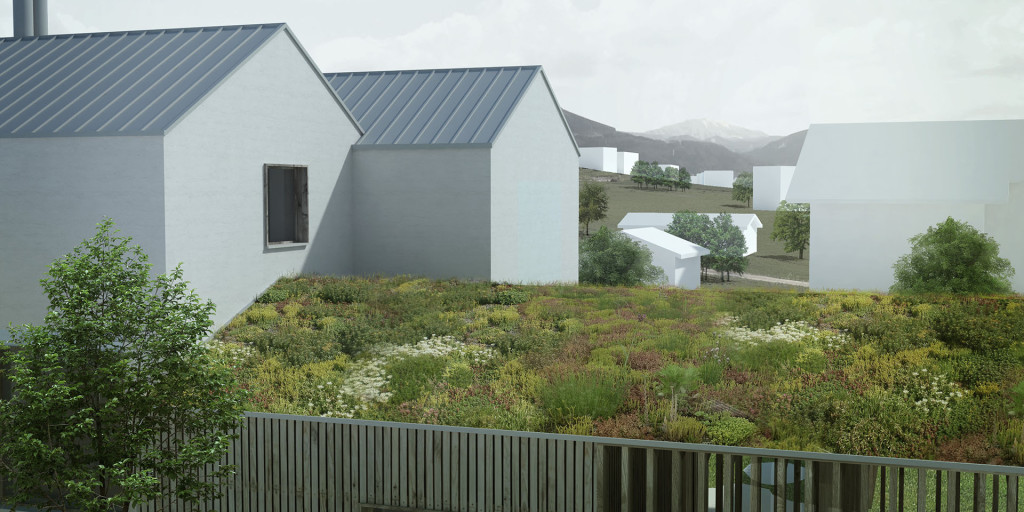 Large french windows to the east and south open the living areas to the view towards Ötscher mountain and connect it with the garden. All bedroom windows on the first floor look over onto the sun canopies covered with “living green carpet”. 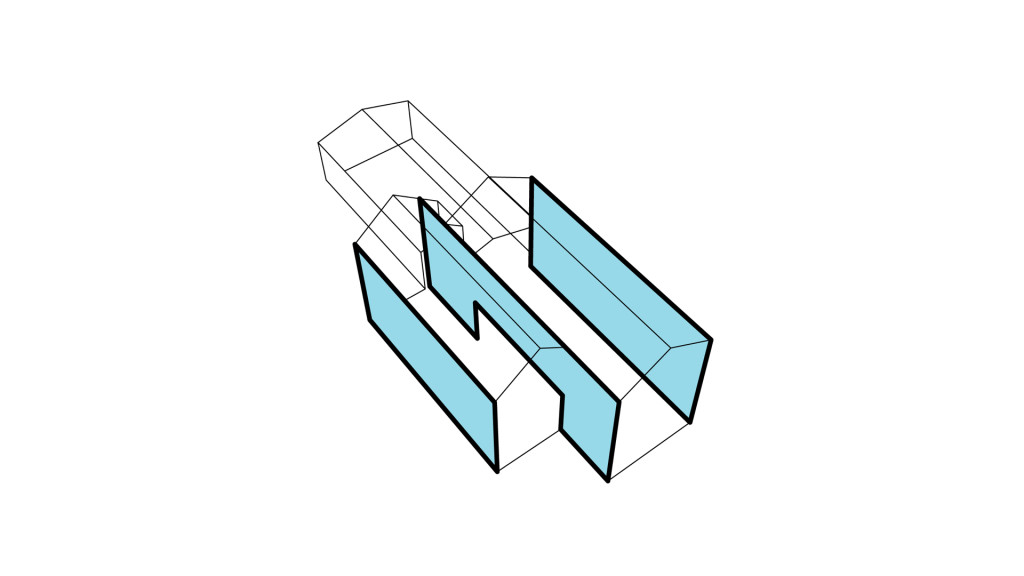 The house is designed as a lightweight wooden structure. Simpe and rational structural schme is based on three parallel load bearing walls creating support for floors and roofs. On the ground floor weight forces are transferred to the side walls by a single beam hidden in the ceiling height to create an open plan.